John Keel noted that a disproportionate number of UFO sightings occurred on Wednesday evening. This was true when he was studying them in the 1960's, but was not true over the long term. Remarkably, the peak day for UFO sightings has migrated over the decades, an average of one day per week per decade until the 1990's. Thereafter it moved to Sunday in the 1990's, then firmly to Saturday in the 2000's and the 2010's: 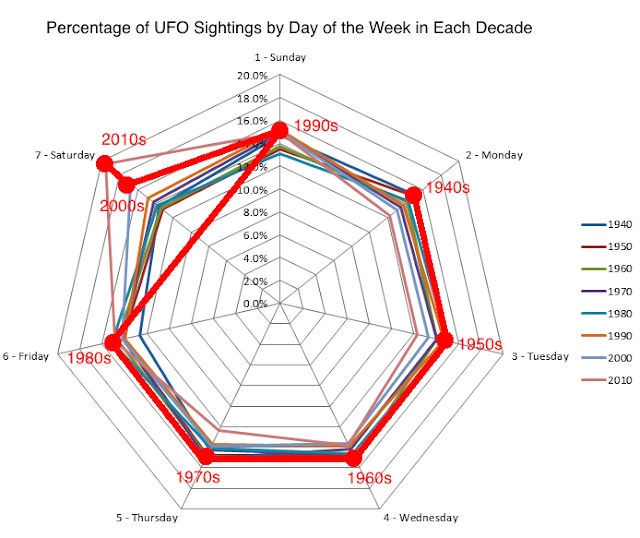 The same cycle occurs for every category of sightings. How to explain this?

The skeptic would say it just reflects the source of the reports. Most reports in the 1950's and 1960's were from local newspapers or to the US Air Force. Most Air Force staff worked Monday to Friday. Local newspapers had only skeleton staffs working on weekends. With no one there to take an initial phone call of a report, callers may have given up. From the late 1990's most UFO sightings were self-reported on the Internet. This shifted the primary days to the weekends, when more people were in the outdoors and had the chance for a sighting. Furthermore, over the decades, the world became increasingly urbanized and desk-bound. There were fewer farmers, ranchers, and workers out and about on weekdays.

On the other hand, this does not necessarily explain the steady progression through the week until the advent of internet self-reporting. Even if sightings had followed the earlier trend, they would have moved to the weekend in the 1990s and 2000s anyway. The movement of one day over a 10 year period would indicate a gain in some kind of UFO daily time cycle 1/3,652.5 = 0.0273785% = 23.65 seconds greater than the length of an earth day.... which does not evidently correspond to any known celestial or earthly time variation.

Maybe we're not looking at this with enough granularity. Let's look at what day of the week was the day for peak sightings by calendar year rather than decade: 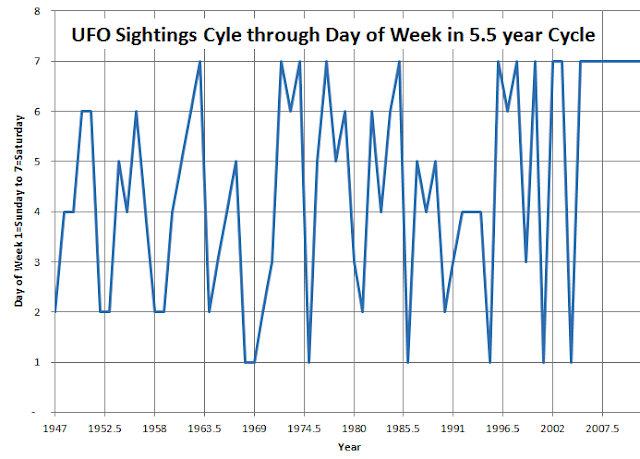 Here we see three things: an evident cycle of around 5.5 years for the sightings to cycle through the week; the no weekend effect until after the closing of Project Blue Book in 1967; and the flatlining at Sunday sightings after the introduction of internet self-reporting.

Now what has a 5.5 year cycle? It doesn't seem to correspond to any relationship between the earth and other planets in our solar system. There are two candidates, however:


Any other suggestions?
Posted by UFO DNA at 6:14 AM